Theme for the Day

AFTERBIRTH: Parenting by Jennifer McCoyMarch 2, 2012August 27, 2020
Do you ever live theme days? Like a certain obscure something is mentioned twice, and you’re like, how can  “cherub”come up in completely unrelated conversations three times during one afternoon? Or when you hear “Billy, Don’t Be A Hero” twice within the same twelve hours. Recently, the theme that emerged that day was opossum. The friendly guy in the elevator offered suggestions on how to kill them. (Tip for the day: fly bait. Who knew?) Opossum chatter was everywhere, and all those who uttered their experiences with opossums had a visceral reaction to them. Well, everyone except the Aussie who admitted he had a opossum sweater. Apparently Australian opossums are sweeter and softer than American opossums. I’m still not wearing a sweater made out of them. Here’s a nice Australian opossum. Snugly warm. Isn’t he sweet as only an over-sized rodent can be?
﻿ 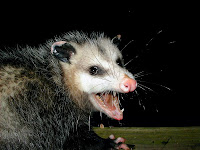 This is an American opossum. Vicious, gnarly, cat food eating, garbage meddling creature.
I miss you, honey badger, even if you don’t give a fuck.
Please come home.